Running TensorFlow Models (Part 3 - Using the model in other apps)

So you’ve trained your TensorFlow ML model, now what? (Part 3 - Using the model in other apps)

The first two posts in the series showed how to run a TensorFlow model, then how to deploy it to Kubernetes. Now that our image classification service is managed by a scheduler and scaled dynamically, the next step is to start using it. In this post, we’ll walk through an example Node.js single page app (SPA) that calls the service and displays the classification results.

The demo web page shown below is very simple with practically no formatting. It’s purpose is only to show how to call our image classification service. But, the layout and styles could easily be styled by a web designer for a nicer look and feel. It has one input field that takes an image URL. Where the Python script we used in Part 1 would be very useful for processing a folder full of image files, this Node.js page is a better example for an image portfolio or e-commerce website that processes user uploaded images.

When the Classify button is clicked, the magic happens in server.js. The classify() function downloads the image at the given URL, encodes it into a Base64 string and passes it in the request to the service endpoint. An example of the YAML structure for the request is below. The model_spec values tell Serving which model to use and inputs must map to the signature for that model when it was exported.

Once a service client is instantiated, making a prediction is simple. It’s done by calling the predict() function passing in the request YAML described above and processing the results found in the response. I hard-coded the service endpoint to inception-service:9000 for purposes of this demo. I’m targeting Kubernetes, which provides service discovery to resolve the address dynamically. Otherwise, I’d make it configurable.

The prediction service sends back response outputs named classes and scores. Like the inputs, the outputs are also defined by the model when exported. Classes are the names of the top 5 category predictions. Their corresponding scores represent prediction confidence.

The prediction outputs are parsed and formatted for UI display. Scores are translated to percentages using the softmax() function.

Classes and percentages are returned to the demo page where they are displayed using hidden placeholder tags in the page. As a side note, this is what makes the demo UI a SPA. The page never navigates away to a new page. Instead, using the Node.js libraries Express and Socket.io, Javascript code calls from the page to the server, gets the results and dynamically updates the same page in place. That’s probably a good topic for a future post on it’s own. 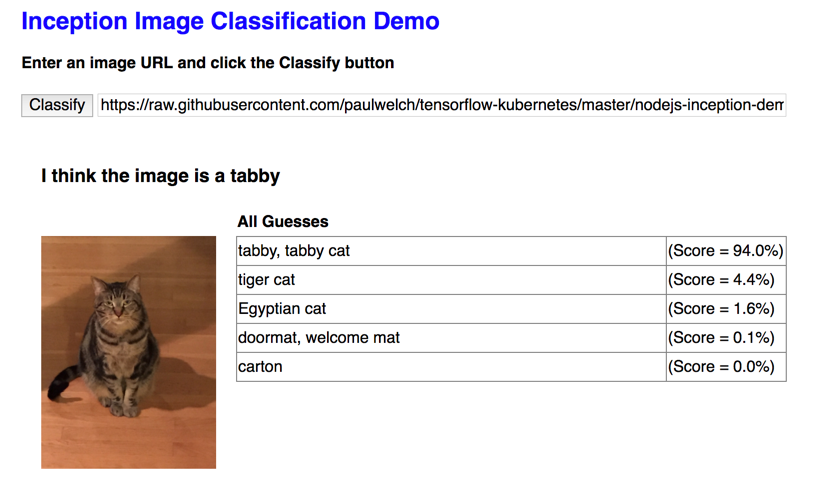 One final piece. If you want to run the demo page in Kubernetes, you need to package it as a container. Or, you can just use my image, created following the same steps as this post.

To make your own image, use the docker build command with a Dockerfile such as the following example.

Then, push it to your favorite repo and deploy to Kubernetes in the same way we did with the service in Part 2. An example Kubernetes deployment YAML for the demo UI can be found in the project here.

You now have your own private image classification service similar to AWS Rekognition or Google Vision. But, it’s one you can run on your own servers. I showed calling the service from a Python script in Part 1 and from a Node.js webpage in Part 3. It can just as easily be used in apps written in any other language that supports gRPC. Some suggestions for where to take it next might include:

Those are all interesting topics that I might get back to at some point. But personally, I think there’s a much more interesting and bigger problem domain looming on the horizon. That is, ways to improve the process from training through using the deployed model. Stay tuned.

Full source code for this series can be found on GitHub here with the demo UI in a subfolder named nodejs-inception-demo.